We hope you enjoyed our outstanding virtual Peace Talk on May 15th. We heard about the enormous global environmental devastation of wars and the military from Jim Janko, member of the Albuquerque, NM, chapter of Veterans For Peace, and an active participant in VFP’s Climate Crisis and Militarism Project.

We then heard from Kamillah Ealom, Community Organizer and Program Coordinator for Greenaction for Health and Environmental Justice. She told us her compelling personal story of the impact military pollution has had on her family and others living in Bayview/Hunters Point, and discussed what actions they are taking to fight for their community and for environmental justice.

For those of you who weren’t able to join us, it was recorded and we will have it available to view soon. We will continue to be involved with the presenters, especially Kamillah Ealom with Greenaction in San Francisco.

Today would have been WILPF Life Member (Berkeley – East Bay branch now East Bay) Madeline Taylor Duckles’ 106th birthday – she left us here in November 2013, but her memory, much of her work and inspiration all live on.

I’ve been thinking a lot about her today and am sharing some memories with you all. Her East Bay branch members gave her a WILPF Life Membership in 2005, at the US Section Triennial Congress held that year at San Francisco State University. Although she protested that expenditure (and worked during the following year to raise the $500 to replenish the branch treasury!), it seemed pretty clear that she was pleased with the thoughtfulness of the gift, nonetheless.

In addition to her many other worthy efforts, Maddie worked for WILPF in projects and volunteer leadership positions over the decades of her membership – all too numerous to count, but clearly all using and promoting consensus decision-making and support and furtherance of WILPF’s principles and policies, particularly those relating to ending wars and ending nuclear weapons and power. She surely would have been marching, leafleting and speaking in support of the 2017 UN Treaty on the Prohibition of Nuclear Weapons (TPNW) and so delighted at the awarding of the Nobel Peace Prize to ICAN* for those efforts in 2017.

Maddie was a tireless worker for peace, and social and economic justice, as well as equality and human equity in every form throughout her life.

Editorial by Janet Slagter, Alternate Regional Representative for the Americas to WILPF’s International Board

On May 14th, responding to a May 2nd leaked draft of the forthcoming Supreme Court of the US  (SCOTUS) abortion decision, tens of thousands of feminists hit the streets in 400 US cities. Despite the fact that 60%+ of US residents support legal abortion, the SCOTUS majority is poised to overturn that court’s 50-year-old Roe v. Wade decision which made most abortions legal nationwide. The right-wing, thanks to Trump’s 4 appointees, now has a 6 to 3 advantage. Even though many states have passed 1100 laws limiting abortion rights since Roe, the core of it has been upheld. Recently, counting on a new SCOTUS, many states have passed extremely restrictive laws to force Roe’s reversal on appeal.

The SCOTUS majority will affirm the state of Mississippi’s 15-week abortion limit. Literally based on the fathers’ reasoning – including British 17th century common law, the US Constitution, and late 19th-century state laws criminalizing abortion – Samuel Alito, author of the legal draft, argues that since abortion was not mentioned in the Constitution and thereafter states criminalized it, abortion is not a right. In the time period that Alito finds historically important, women were excluded from voting, holding office, or even owning property if married. He picks and chooses history, ignoring both the period before criminalization and the last half-century.

Results? In 13 states abortion will immediately be illegal after the SCOTUS decision, and 13 more will follow. Their residents will travel hundreds of miles seeking abortions. But abortion is only one reproductive issue to solve. Following a reproductive justice model, we need to analyze reproduction – both having and not having children – from the lives of people most constrained by its regulation: women of color. Examining the history of forced breeding and forced sterilization, forced removal of children, lack of social support for child-raising, our lack of control over birthing decisions, over-policing and criminalization of people of color, and the commodification of producing and caring for children – we need to create holistic policies.

WILPF US continues to mobilize, with other organizations, demonstrating, writing letters, meeting with legislators, and securing transportation, housing, and funds for women who must leave their states to get abortions. 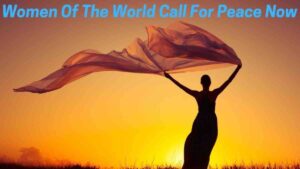 Listen to this extraordinary recording:

Featuring Nobel Peace Laureate Mairead Maguire, Ambassador Elayne Whyte Gomez and Dr. Paula Garb. These women are all leading in a new way, showing us a pathway forward to peace and disarmament. They are calling on us to awaken and join together to eliminate nuclear weapons from the face of the Earth.