At our monthly planning meeting of the East Bay and SF branches, we started the morning remembering and honoring our local WILPF women who contributed so much working for world peace and freedom in their own communities: Judy Nakadegawa, Rhoda Norman, Madeline Duckles, Eileen Hernandez, and Eleanor Ohlman. We decided we would set aside time every month in our meeting to honor one of our own WILPF women. If there is someone you would like to honor, respond to this email with her name and a little about her life, your connection to her and her connection to WILPF.

Deetje of the San Francisco branch has been collecting archival materials on social movements for many years. These materials (17 boxes!) which include WILPF materials will be going to the Bancroft Library at UC Berkeley in April. If anyone has WILPF materials from the ‘80s and ‘90s, you can send to her to be included.  The Bancroft is particularly interested in that period. This library also has WILPF materials from Madeline Duckles in its collection.  The library will take one year to categorize it before it will be available to the public.  Barbara N. said other libraries that have WILPF archives include Swarthmore, Boulder and Stanford.

The Nuclear Weapons Abolition and Energy Conversion Act in the House of Representatives would “provide for nuclear weapon abolition and economic conversion…while ensuring environmental restoration and clean-energy conversion” The bill calls on the United States to ratify the Treaty on the Prohibition of Nuclear Weapons, and use the $1.7 trillion taxpayer dollars currently budgeted for nuclear weapons “modernization” instead to transform the war industries, address climate change, develop carbon-free, nuclear-free energy, and provide other pressing needs such as health care, education, housing, and basic infrastructure.

Let your representative know you want them to support it HERE.

This January, President Biden issued a United States Nuclear Posture Review (NPR), prepared by the Department of Defense in a tradition started in 1994 during the Clinton Administration and continued during the Bush, Trump and Obama presidencies. Veterans For Peace is concerned that the world is on a downward spiral toward climate catastrophe and our nation increasingly wastes its scarce resources on weapons that are ultimately useless except to line the pockets of the Military-Industrial-Congressional-Intelligence-Media-Academic-Think-Tank Complex (MICIMATT). International security would best be served by committing a World War level of effort to address the climate crisis rather than
preparing for every conceivable military threat.

This excellent, in-depth report is a review of the state of nuclear weapons in the world today, and includes 16 concrete recommendations in three areas: unilateral, immediate posture changes to reduce the danger of an unintended nuclear exchange; negotiations for nuclear disarmament; implementation of treaty obligations. To read the full report, go HERE.

In this 30-minute talk, Phyllis Bennis, Director of the New Internationalism Project at the Institute for Policy Studies, gives an in-depth analysis of the Ukraine-Russia situation. Well worth watching HERE.

WAR ABOLITION 101: HOW WE CREATE A PEACEFUL WORLD

How can we make the best argument for shifting from war to peace? What must we understand and know about the war system if we are to dismantle it? How can we become more effective advocates and activists for ending particular wars, ending all wars, pursuing disarmament, and creating systems that maintain peace? These questions and more will be explored in War Abolition 101: How We Create a Peaceful World.

War Abolition 101 is a six week-online course providing participants an opportunity to learn from, dialogue with, and strategize for change with World BEYOND War experts, peer activists, and changemakers from around the world. To learn more and to register, go HERE.

MARCH IN SF FOR PEACE IN UKRAINE ON MARCH 6TH 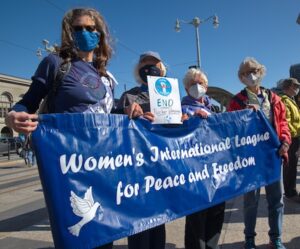