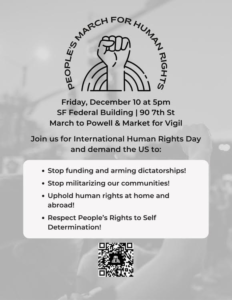 Fannie Lou Hamer (1917-1977) is a prominent leader for the Civil Rights Movement, women’s rights, and American voting. She was also a community organizer, activist, and challenged the definition of liberation and freedom. The Fannie Lou Hamer branch of WILPF US in Columbus, GA was formed in January 2021.

The conference will consist of an opening plenary, breakout sessions, and discussion.

Topics will be: Ending Mass Incarceration, Abolishing the Death Penalty, Immigration Justice, the UN International Decade for People of African Descent /Reparations, and the Treaty on the Prohibition of Nuclear Weapons (TPNW).

SOLIDARITY ACTIONS AND ONE WILPF TOPICS

Thursday, December 9 4:00pm Pacific Time is our final One WILPF call of 2021. We will be opening up a discussion among branches and members to share their accomplishments in 2021 and plans for 2022, and to talk about how the One WILPF calls can help strengthen our actions by working together to build a better world. You can register for the Zoom call here. 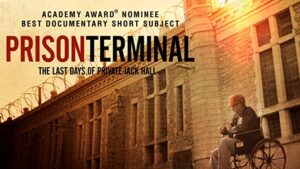 In partnership with REIMAGINE, The Humane Prison Hospice Project will host a film screening of Prison Terminal: The Last Days of Private Jack Hall, followed by a panel discussion with Edgar Barens, the filmmaker, the Humane Prison Hospice Project’s cofounder Ladybird Morgan, RN MSW, and Marvin Mulch, who was incarcerated for more than 41 years, unjustly accused of a crime he did not commit.

Prison Terminal: The Last Days of Private Jack Hall is a moving cinema verite documentary that breaks through the walls of San Quentin, one of America’s oldest maximum security prisons, to tell the story of the final months in the life of a terminally ill prisoner and the hospice volunteers, they themselves prisoners, who care for him.

Excerpts from an article by Medea Benjamin in Nation of Change

“If you build it, they will come,” said Kevin Costner in the Field of Dreams. In Cuba, they didn’t come. Dissidents on the island, with their U.S. backers, had been working feverishly for months to turn the unprecedented July 11 protests into a crescendo of government opposition on November 15. They built a formidable structure, with sophisticated social media (including an abundance of fake news), piles of cash from Cuban Americans and the U.S. government, and declarations of support from a bipartisan Congress and all the way up to the White House.

Even after the Cuban government denied the protesters a permit on the grounds that they were part of a destabilization campaign led by the United States, anti-government forces insisted that they were undeterred and were ready to take the risks. But in the end, their Field of Dreams turned out to be an illusion.

…Certainly, the efforts by the dissidents and their U.S. backers to damage the foundation and topple the Cuban government are not over. But as the head of the North American division in the Foreign Ministry, Carlos Fernando de Cossio, tweeted, “The U.S. government misread Cuba when it decided to invest so heavily in trying to instigate insurrection. We Cubans want to improve our country & move forward, not back to the times when we were the friendly playground of U.S. capital, corruption & ambition.” If only the U.S. government would learn this 60-year-old lesson.