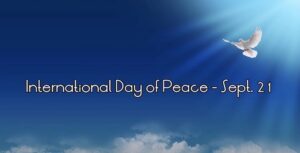 Ying was a warm and loving woman with a beautiful smile. She had an active voice in left-wing politics throughout the course of her life as a first-generation Chinese immigrant, author and schoolteacher of 21 years. Ying captured her compelling upbringing in her book “Ying Lee: From Shanghai to Berkeley.” Her extensive social justice efforts for the anti-war and racial justice movements continued through her final years of life. She was a member of Grandmothers Against War, an anti-Iraq War group, and Women’s International League for Peace and Freedom.

“She was gentle towards people but fierce with her ideals,” (Kate Harrison, Berkeley City Councilmember)

“I would hope that everyone in public service and in advocating would take a page out of her book and stand up for the causes that she believed in,” (Tony Thurmond, California Superintendent of Public Instruction)

Ying will always hold a special place in my heart, our community and the planet. Her life will be remembered as one of love, passion, compassion, dedication, and brilliance. Her legacy will provide us guidance in rising to the occasion as we continue her fight for peace and justice. (Barbara Lee, United States Representative) 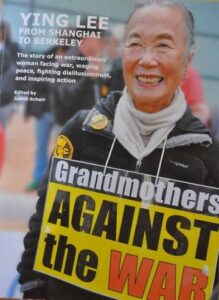 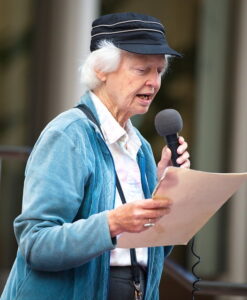 The Peace in Ukraine Coalition of the Bay Area held spirited rallies outside the offices of California Senators Alex Padilla and Dianne Feinstein in San Francisco on Thursday, September 15th.

Senator Padilla’s aide met with the demonstrators and accepted the Coalition letter to the Senator, which includes a list of Coalition members and the article “Peace Talks Essential as War Rages on in Ukraine” by Medea Benjamin and Nicolas Davies. After the rally at Senator Padilla’s office, there was a march through San Francisco’s Financial District to Senator Feinstein’s office, where three members of the Senator’s staff joined the group to accept delivery of a Coalition letter to the Senator and to discuss their messages calling for Peace in Ukraine.

Betty Traynor and Deetje Boller (photos above, photographer Leon Kunstenaar), two longtime members of our San Francisco Branch, not only attended the event, but also spoke at the rally. This is Betty’s impassioned message for peace:

I am speaking for the Women’s International League for Peace and Freedom – WILPF, the oldest women’s peace organization in the world started in 1915 during WWI, and specifically our local branches here in S.F. and the East Bay.

We are very happy to be here IN COALITION with so many other peace and justice groups throughout the country to end yet another war. The situation in Ukraine and beyond shows us that, once again, WAR cannot and will never be a solution for peace and stability. In these times, the most sensible thing we can do is to build international solidarity as we are doing today—to come together and channel all our individual voices into one collective, loud and decisive voice that calls for an end to militarization and war-mongering.

This war is intolerable as are all wars. We deplore the impacts of militarism that degrade the environment in numerous ways as we are seeing in Ukraine and threaten massive nuclear contamination of a country, impacts that affect women and children and the elderly disproportionally.

We in WILPF-US recognize that again NATO expansion, begun in the late 1990s, is contributing to the crisis today. We SUPPORT in Coalition with Peace in Ukraine:

In a move that shocked and angered California activists up and down the state, and after decades of organizations like the Abalone Alliance and other anti-nuclear groups around the state fighting to close Diablo Canyon, Governor Newsom and the California State Legislature voted to extend PG&E’s use permit for 5 more years. The Diablo Canyon plant had been slated to shutter by 2025. The last-minute proposal passed by the state legislature early Thursday could keep it open five years longer, in part by giving the plant’s owner, Pacific Gas and Electric (PG&E), a $1.4 billion forgivable loan.

Despite decades of debate and billions of dollars spent, the U.S. still does not have a permanent storage site for its growing amount of nuclear waste. Diablo Canyon, located on California’s Central Coast, sits near several seismic fault lines, inspiring long-held fears of a nuclear disaster similar to the kind experienced in Fukushima, Japan in 2011.

PG&E has long maintained that Diablo Canyon is safe from tsunamis, earthquakes and flooding. But concerns remain.

Juliet Christian-Smith, a regional director at the Union of Concerned Scientists estimates an earthquake-induced accident could cause more than $100 billion in damages and 10,000 cancer deaths.

“The bill ignores the plant’s environmental impacts and vulnerability to earthquakes,” she said. “Safety cannot take a back seat in our quest to keep the lights on and reduce global warming emissions.”